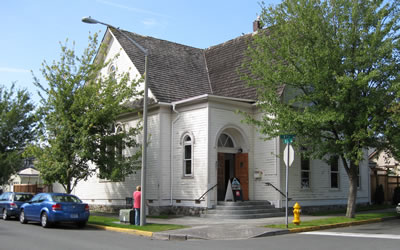 An old Anacortes church has been transformed into the Croatian Cultural Center by local arts patron Maria Petrish.

Co-owner Maria Petrish has long called it “the little church at 5th and R,” but, since she started renovating the building, she’s started calling it the Croatian Cultural Center.

Petrish and her partners in Three Marias, her mother and Marija Anderson, have added a new kitchen and two patios, or tarazza. They’ve opened the place for business on Saturdays, when the Anacortes Farmers Market, just a block or two away, is open.

They serve authentic Croatian food and drink to those who wander up from the farmers market.On Saturdays, the feature espresso and lunch fare.

The building includes a large room which is available for rental activities. Maria Petrish, who is married to City Council member Nick Petrish, says the room can seat 111 for a sit-down meal, but the room’s rated capacity is 134.

Maria Petrish says the church was built in 1891 and was the first church in Anacortes. Since then, she says, it has had several owners and was even a plumbing warehouse for awhile.

Each successive owner treated the building with less respect than the last and she finally bought it in 1981. Her goal was “to save an Anacortes landmark.” She says she has mostly achieved that. The building still needs a new room and the building’s exterior needs painting. Both projects coming soon, she says.

In the meantime, the “little church” also houses the Bowman Gallery, named in honor of Anacortes’ founder Amos Bowman and his wife Anna Curtis.

So, when you have a chance, visit the Croatian Cultural Center, aka, the little church at 5th and R.