Come aboard SHIP for an unforgettable Northwest adventure

Its attributes are mind-boggling, from trails and boardwalks through 25 acres of freshwater wetlands to an inviting 2,000-foot sandy beach with sub tidal eelgrass beds and all of the creatures drawn by that rich marine environment.

Who would know that this public jewel in Anacortes, Washington lies immediately next door to a state ferry terminal that draws two million travelers annually as they move to and from the San Juan Islands and British Columbia?

Come aboard this SHIP and prepare for an unforgettable adventure, with Mt. Baker on the east horizon. Depending on your interests you might load a backpack with camera, binoculars, notebook or snacks.

There is plenty to experience at SHIP, even if a ferry schedule limits the time you have to slip away from the terminal. On a recent trip I met Friday Harbor resident Lainey, walking the boardwalk with dogs Jake and Lucy. Lainey counts her time at SHIP as a blessing, a delightful respite for herself and her dogs.

If you stand at the edge of the ferry terminal you look over a rare neighborhood where freshwater wetlands and saltwater beach are separated by only a few hundred yards. On the trip when I met Lainey, I collected photographs of herons, gulls, ducks and a bald eagle. From the boardwalk that meanders through the wetlands I spotted a hummingbird and a pair of squirrels who scurried away quickly over a fallen tree carpeted with moss.

In addition to flora and fauna, a purposeful feature of SHIP is the collection of interpretive signs sprinkled throughout. Small signs with photographs reveal details of a population including flora such as bulrush, Nootka rose, hardhack, silverweed and hops. 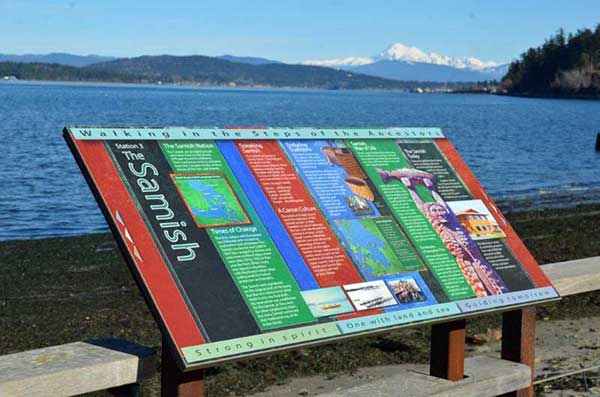 Larger signs, situated close to boardwalk viewpoints and benches, answer many of the questions you might have about the area and its history. Interpretive themes include “Walking Through the Steps of the Ancestors” and “Beginning the Great Age of Salmon.”

Here you will read about the area’s original inhabitants. Waters of the Puget Sound were once the highways of the Samish people as they traveled by canoe between the San Juan Islands and the mainland. This area was among many Samish villages and seasonal camps.

You will also learn of the arrival of the Europeans, and of a fisheries industry that led to this community’s one-time distinction as The Salmon Canning Capital of the World.Walking in the Steps of the Ancestors

Many years were spent laying the foundation for this preserve, dedicated to the vision of protecting an endangered ecosystem while providing an outdoor classroom for students and the public. Among key players in its development were the City of Anacortes, the Anacortes Parks Foundation, Washington State Ferries, the Port of Anacortes, Samish Nation, Anacortes School District and Western Washington University Shannon Point Marine Center.

Whether you are a ferry traveler or simply a Northwest adventurer, put Ship Harbor Interpretive Preserve on your “Must Visit” list. There are treasures for all ages.

Directions: It can be a little tricky to find SHIP. Going west on Hwy 20/Oakes Avenue toward the state ferry terminal, turn right on Glasglow Way, a street that winds through a residential neighborhood. Turn left on Edwards Way (second street). Drive down the road until you reach a cul-de-sac and park, saltwater channel in full view. Two trails are part of the Anacortes City Park system, and there are no fees. Note that the cul-de-sac features a doggie bag station and seasonal port-a-potty. The paved trail to the east is Guemes Channel Trail. The one to the west (subject of this article) is Ship Harbor Interpretive Preserve Trail.