Skagit County Public Works is proposing adjustments to ferry fares in 2023. A consulting firm, KPFF Consulting Engineers, has been hired to provide services for a rate study for the Guemes Island Ferry system. The study—which is scheduled to begin in January 2023—will evaluate the current fare structure and make recommendations for rate adjustments planned for 2023. Skagit County seeks to implement electronic fare collection by the end of 2023. Recommendations of the study will consider and prioritize the future of fare collection.

In advance of this undertaking, the County is seeking feedback from the public. A public open house is scheduled for Tuesday, January 3 from 3:00 – 5:00 p.m. in the Commissioners’ Hearing Room at 1800 Continental Place in Mount Vernon.

A virtual option is also available for those who would like to participate. Use the following link to log into the meeting: https://bit.ly/SkagitBoCCMtg.

Anacortes art galleries and many downtown shops will be open for monthly First Friday Artwalk on Friday, Jan. 6 from 6-8pm. Here's a list of galleries. 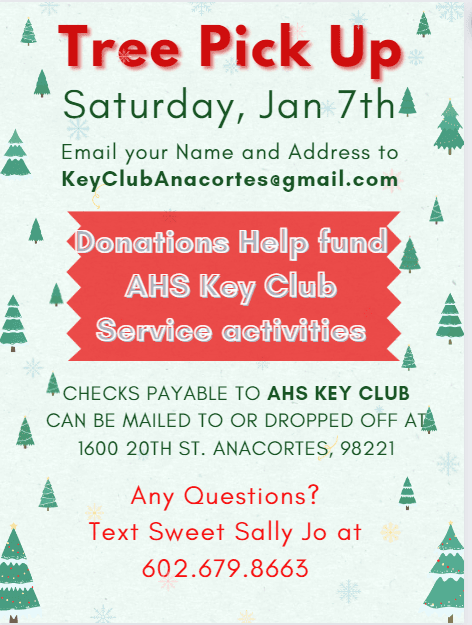 The Key Club and Kiwanis Club will be pick up Christmas Trees on January 7, 2023. Please email your name and address to: This email address is being protected from spambots. You need JavaScript enabled to view it. to ensure your place on the pick-up list. Donations help fund AHS Key Club service activities and are deeply appreciated. Thank you in advance for your generosity!

Yoga at the Library: Gentle Flow for Adults

Now offered twice a month! Join us at the library on the first and third Saturdays of the month for a simple 60-minute yoga practice designed for every body. Move through some basic poses while linking breath to movement. Great for beginners or anyone looking for a gentle practice. Bring your own yoga mat.  Yoga at the Library: Gentle Flow for Adults. Saturday, January 7 & 21 9:00 am. Community Meeting Room

POLLY O’KEARY AND THE RHYTHM METHOD- A century ago, blues was born in the fields of the South, played on porches and in little backwoods bars by kerosene lamp. The times have changed, and it’s a rare blues musician who grew up picking cotton and going home to learn to play by the light of a kerosene lamp.

Polly O’Keary certainly didn’t. Well, that is, she didn’t pick cotton. She picked apples. But she learned to read music by kerosene lamp, in a log cabin in a remote part of Washington State. She started playing in ex-pat bars in Mexico at 16, and Eastern Washington watering holes for rural farm workers at the age of 17. She dropped out of school with an 8th grade education, married a prison-bound man at the age of 18 and by the time she was 21 had logged more stage hours than most musicians twice her age. She’d drunk as much as a fair number of them as well.

At 28, upon seeing Jeff Healey at a friend’s bar in Canada, she became obsessed with blues, studying and practicing the genre until carpel tunnel syndrome temporarily rendered her hands nearly immobile, and she quickly came to the attention of the Pacific Northwest blues scene with her powerful and emotional voice and her frenetic stage presence.

Today, she’s a PhD student, a world-traveled bassist, one of Washington State’s most highly-awarded female blues singers and songwriters (six-time Washington Blues Society Best Female Vocalist, four-time Best Blues Songwriter, etc.), doesn’t drink at all, and no longer visits lovers in prisons. But her music reflects the life of a modern blues woman; she’s seen the river rise and take everything more than once, and lived to laugh, sing, and write music about it.

Polly O’Keary is today’s blues woman, rooted in tradition, but informed by the 21st Century. Pulling in influences from zydeco, country, funk, jazz, rockabilly, surf and rock and roll, she and her trio, Polly O’Keary and the Rhythm Method, bring a searing and joyful performance of today’s blues to audiences across the U.S. and Canada.

Polly O’Keary and the Rhythm Method is the trio she built with her husband and drummer Tommy Cook, also a highly sought touring drummer and winner of the 2017 Washington Blues Society Blues Drummer award, with whom she shared rhythm section duties for international touring act Too Slim and the Taildraggers for four years.

​Rounding out the trio is David Miller, who grew up listening to blues in Texas. At 17, then living in California, Miller met a piano player who was then working for Tommy Castro. The older musician recruited Miller to come play at several bars, and assured the young man that he could get him in, underage though he was. Miller became a regular in clubs in the Bay Area, sitting in with local and touring acts night after night. At 25, then living in San Luis Obispo, he assembled The Dave Miller Band, and for the next 18 years, he and the group went on to become one of Southern California’s most popular blues bands, leading one reviewer to describe his “jaw-dropping guitar licks” and praise his “extraordinary mixture of inspiring virtuosity both vocally and instrumentally.”

Jazz trombonist Beserat Tafesse grew up with a wide array of musical and cultural influences, including traditional Ethiopian jazz. His work includes the Grammy-nominated album 'Art of the Arrangement' by Doug Beavers, one of many projects he gladly lent his horn-playing to. Tafesse has played with Birdland Big Band in New York City and has travelled the globe with groups sucn as Kaleidoscope. Free to all. At Anacortes Library, Community Meeting Room.

Skagit Domestic Violence and Sexual Assault Services will lead this adult workshop on how to talk to your teen about consent and healthy relationships. Coinciding with workshops happening at the high school this week, learn how you can support your teen in setting boundaries for all kinds of relationships.  Talking with Teens. Wednesday, January 11 6:00 pm. Community Meeting Room

The “Mike Faast Jazz Quartet,” shares jazzy renditions of the American songbook ranging from the great swing era of the 40’s to the soul of the 60’s, (Motown).

The band features Camano Island resident Andy Carr, on Piano. Andy is one of the most sought-after pianists in the NW well versed in many styles of music including classical, jazz, and latin styles. He is a member of The A-town big band, The Swing Nuts, Whistle lake jazz band and Tangoheart. Walt Burkett from Fairhaven, plays the Stand-up Bass in the band. Walt is an accomplished bassist and guitarist. He often performs as a jazz solo guitarist. He also plays in the popular Bellingham group, “the Walrus.” Whidbey Island native Eric Vanderbilt-Mathews is featured on sax and clarinet. Eric has performed at the prestigious Djangofest Northwest Festival on numerous occasions. A popular sideman, he has performed with Ranger and the Re-Arrangers and the Hot Club of Troy and is involve with man Seattle groups. Band leader Mike Faast has been part of the NW music scene for over thirty years, his bands have performed in hundreds of events in the great Northwest, such as Wintergrass (12 times) and the Darrington bluegrass festival, Town festivals such as the Oak Harbor Arts festival, the Copeville town festival and the Anacortes Arts festival. Mike has performed several times with the great country jazz fiddle player, Johnny Gimble and in 2016, Mike was inducted into the Northwest chapter of the Western Swing Hall of Fame! An accomplished vocalist guitarist, Mike is equally at home singing a warm country ballad, a high honkin’ bluegrass tune or crooning a jazz standard. Mike currently serves as bandleader for the Mike Faast Jazz Quartet, the Cascade Mountain Boys (Bluegrass), and the Jangles Western Swing Quartet.

The Maritime Speaker Series is back! Join us on the second Saturday of the month for nautical lectures and lessons. Our first guest speaker is Andy Schwenk. Schwenk grew up in Anacortes working for charter companies running power and sail boats throughout the San Juan and Gulf Islands. He has completed more than 50 Transpacific crossings on sailboats 26′ to 72′. Maritime Speaker Series: Andy Schwenk. Saturday, January 14 2:00 pm. Community Meeting Room

Come on down to the Rockfish and get yer twang on.

CHRISTINA ATTEBERRY - Vocalist CHRISTINA ATTEBERRY, aka “The Singer Tina”, has been lighting up the stages of local music venues with her soulful voice and radiant smile. Christina was brought to Whidbey in 2014 by the Navy and has been here since! Not only is Christina the proud mother of four great kiddos, she is an entrepreneur with a thriving jewelry design business and a burgeoning music career. A self-trained singer, her musical influences include Lauryn Hill, Norah Jones, Colbie Gaillat, Ne-yo, and Tamia. She can’t thank her awesome husband enough for all the support.

The library and PFLAG Skagit present the film, My Otherland, a story of becoming your authentic self.In the film, Linden Jordan shares how he found the courage to make a life-changing decision at 63, to become the person he really is. A panel discussion with Jordan will follow the film. Jordan is thepresident of PFLAG Skagit and a member and chair of the speakers bureau. His passion is helping people understand others in a way to encourage openness and acceptance of those whom we might least understand. My Otherland. Wednesday, January 18 6:00 pm. Library Community Meeting Room

From its inception, jazz was subjected to economic and racist exploitation wherein black musicians battled malignant forces dominating the music scene. Recordings by Louis Armstrong, Duke Ellington, Billie Holiday, Charles Mingus and others that focus on the issue of racism will be listened to and discussed during this lecture in addition to other historically important events involving the intersection of jazz and race in the United States.

The agendas for next week's school board meeting have been posted to the board's website: https://www.asd103.org/District/Department/48-School-Board

CD is always backed by a dynamic and musical rhythm section on bass and drums. Winner in the ‘Best Band’ category by the Washington Blues Society in it’s 2019 International Blues Challenge competition. From a reputation as an ace sideman and “The Northwest’s best kept secret” in the Pacific NW blues scene; CD Woodbury is emerging as an internationally recognized singer, songwriter, and guitarist. The CD Woodbury Band album “Monday Night!” charted internationally in its genre, including 30 weeks at #1 for the Roots Radio Report’s Washington State independent radio chart and peaking at #8 on the international independent blues radio charts. CD Woodbury has eleven Best of the Blues awards from the Seattle based Washington Blues Society including Blues Performer, Songwriter, NW Recording, and has won the Electric Blues Guitar BB Award five times in the past decade.

Book Club at the Library

Join this volunteer led discussion for the first book club of the year. January’s pick is Facing the Mountain by Daniel James Brown. Anyone who has read the book is welcome to join the discussion. For more information contact the library or visit our website at library.cityofanacortes.org. Book Club at the Library. Monday, January 23 2:00 pm. Library Community Meeting Room

The Anacortes School Board will interview four candidates for temporary appointment to the school board, filling the remainder of Marilyn Hanesworth’s seat which expires in November, 2023.

Interviews will take place in-person on Wednesday, January 25th from 5:20 - 8:15 p.m. in the Anacortes High School Library. The interviews are open to the public to observe. The board plans to announce the selected appointee during a special meeting on January 26th at 7:30 p.m. via zoom.

The interview schedule is posted on the board’s website: https://www.asd103.org/District/Department/48-School-Board

The selected appointee will be sworn in at the board’s February 23rd meeting, and will have the option to run in the November election.

FIDALGO SWING - Fidalgo Swing is led by founding member Allen Lewis who is joined on guitar by local legend, Aaron Howell. The two surround themselves with some of the best players in the area. Join us for an evening of Django inspired fun!